How To Dispose Of Broken Cell Phones in the US 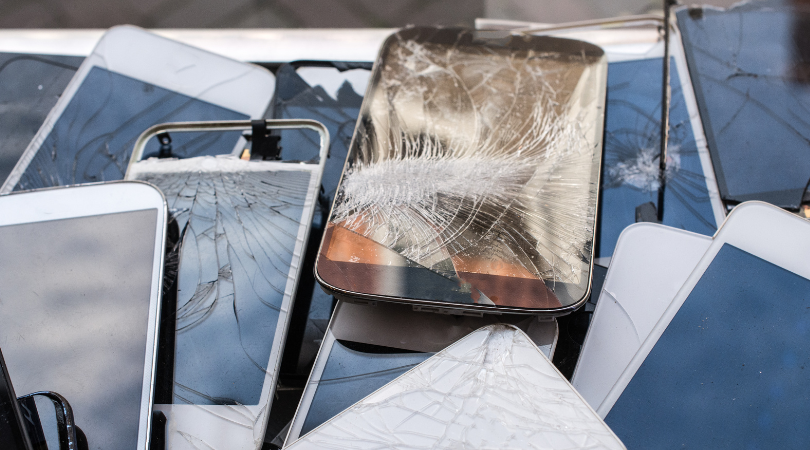 If the question “how to dispose of broken cell phones in the US” pops up in your head every time you randomly open the storage box your used electronics now call home, this broken cell phone disposal guide will give you the inside scoop.

Cell Phone Disposal: What To Do With Broken Cell Phones

After 2 years of daily use, your once new and lustrious cell phone practically refused to endure the torment of hours of daily scrolling any longer. Now, tucked away in some random drawer in the bedroom, it remains untouched, collecting dust and taking up space–indefinitely, from what it seems.

”Any idea what to do with old broken cell phones?” you boringly ask your fellow tech hoarder friends over a cup of coffee. “Can you throw away old cell phones or should I consider smartphone recycling?” The answer is pretty simple.

Why Sustainable Broken Cell Phone Disposal Is So Important?

E-waste is the fastest-growing municipal waste stream in America

You probably know that e-waste heavily affects our planet. But the stats may sock you – or at least persuade you to listen to the pros who know exactly how to dispose of broken smartphones sustainably. Between 20 and 50 million metric tons of e-waste are disposed of worldwide every year. That’s equivalent to throwing out 1000 laptops every single second. The US alone, generates 6.92 million tons of e-waste, about 46 pounds per person in a single year. E-waste is the fastest-growing municipal waste stream in America, according to the EPA.

Yes, that’s a whole lot of electronic waste. However, it’s not surprising given that In 2021, 1.4 billion mobile phones were purchased – a 6% increase year-over-year, according to Gartner.

Billions of dollars worth of raw materials get lost every year

The good news is that up to 80% of a phone is recyclable. But unfortunately, even though smartphone recycling and sustainable broken cell phone disposal are available, the value of the raw materials contained in the e-waste produced in the U.S. in 2019 was $7.49 billion. To put this into perspective, we threw away billions of dollars worth of materials that could be used again. This would have been avoided with sustainable broken cell phone disposal.

E-waste is an environmental hazard

So, can you throw away old cell phones? The answer is NO because our devices are made of mercury, lead, chromium, and other heavy metals. When these materials end up in landfills, they release toxins that contaminate the groundwater affecting both land and sea animals.

So grab your old iPhone that has seen better days and dust off your used-to-death electronics storage box – it’s time to take advantage of the best ways to dispose of broken cell phones, ahead.

What Is The Best Way To Dispose Of Old, Broken Cell Phones In The USA?

First things first, before you dispose of your broken phone, make sure to remove the SIM card, memory card, and any other removable parts. These can still be used or sold separately.

Once you have removed all the removable parts in hand, it’s time to decide What to do with old broken cell phones: Here are a few options:

How Do You Recycle A Broken Cell Phone?

So how do you dispose of old cell phones at home? You can visit Earth911 or Call2Recycle to find an e-waste drop-off site in your neighborhood. Alternatively, Republic Services will gladly send you a prepaid box to help you mail your broken cell phone.

The company knows exactly what to do with old broken cell phones and will properly recycle your devices for you. Most probably, they’ll extract some of the material –circuit boards, metal, glass, plastic, and batteries–from the old mobile phone to make other things.

Where To Donate Your Old Broken Cell Phone In The US?

If your phone is still in good condition, you can donate it. You can reach out to local shelters, retirement communities, and other organizations. Most of them accept cellphone donations. So what to do with old broken cell phones that can’t be donated locally? Other organizations will refurbish and donate your old technology to at-risk communities. You can contact World Computer Exchange or the 1Million Project to know more about the process.

Several online platforms allow you to sell broken phones for cash. This way waste can be reduced, resources are conserved, and fed back into the supply chain for new products. Depending on the condition of your phone, the sites will still pay you money although quotes are usually lower for broken devices. BuyBackBoss, Gizmogo, OCBuyBack, Gazelle, and Gadget Salvation are all great options.

How to dispose of broken cell phones in the US sustainably?  Return it to the manufacturer. Some phone manufacturers have take-back programs that allow you to return your phone to them for proper disposal. This option is usually only available for phones that are still under warranty. If they do accept it, sometimes, they offer credit or cash for it.

Is It Illegal To Throw Away Electronics In The US?

Can you throw away old cell phones? No, you definitely shouldn’t. In fact, the US has taken measures against it. It’s important to note that it’s illegal to dispose of electronic devices in the trash in some states. These states have enacted laws that require electronic waste to be properly recycled or disposed of. Smartphone recycling will always be the best broken cell phone disposal method when devices are irreparable or too broken to be sold or donated. If you’re not sure about the laws in your state, you can check with your local waste management agency or the manufacturer of your phone.

In conclusion, there are several options for disposing of broken cell phones in the US. You can sell or donate it, recycle it, repair it, or return it to the manufacturer. Remember, Smartphone recycling will always be the best broken cell phone disposal method when devices are irreparable or too broken to be sold or donated. It’s important to choose the option that best fits your needs and is also the most responsible. By properly disposing of your broken phone, not only you can help reduce electronic waste and protect the environment, but also save natural resources.

Freelance sustainability and fashion writer with an ongoing curiosity to explore new innovative technologies, and report on trends in “green” industries.